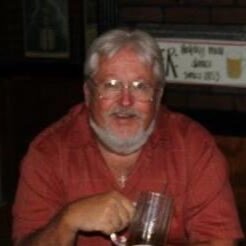 James was born on August 15th 1947 in Detroit, Michigan, to Donald and Marian Feldmann . He served in the US Army 1966-1968 with an honorable discharge. James and Norma met on a blind date the day after Christmas 1967, they married at Most Holy Trinity Church in Detroit on July 9th 1968.. They raised two sons, Diego (James) and Mark, and two daughters, Kim and Dawn. James and Norma relocated their young family to Florida in 1985.

James had a passion for fishing and Barbara Streisand. He loved to watch, the Rays, Buccaneers and Lightning games. He was also an avid music lover and enjoyed 60’s and 70’s rock music. He was known for his quick wit, his infectious smile, and his kind and compassionate spirit. James worked at Largo Medical Center as a CNA for 15 years prior to his retiring. He and his wife Norma enjoyed traveling to enjoy their Disney passes throughout years. And the best times were the family vacations with the kids and grandkids. He loved road trips and listening to music that would take him back to share a memory of his youth.

James was preceded in death by his father, Donald and his mother, Marian his brothers John and Joseph and their sister Joanne. He is survived by his wife Norma, his four children, Diego, Mark, Kim and Dawn, his brother Bob, and several cousins, nieces, nephews and 10 grandchildren. A funeral service will be held on Tuesday August 16th at 10:00 AM at the Saint Patrick's Catholic Church on 1507 Trotter Road, Largo, FL 33770. Flowers or donations may be sent to 130 16th Ave SW. Or donate to Hospice Suncoast.

To send flowers to the family or plant a tree in memory of James Feldmann, please visit Tribute Store
Tuesday
16
August

Share Your Memory of
James
Upload Your Memory View All Memories
Be the first to upload a memory!
Share A Memory
Send Flowers
Plant a Tree