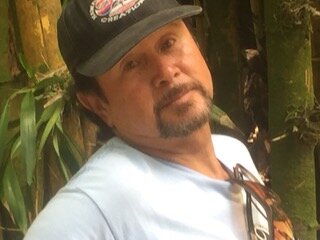 John Lorrin Vesnefski died on April 26, 2022, at Bay Pines VA Hospice of pancreatic cancer. He was 65 years old. He was determined to regain his health, and fought hard for almost a year, walking 5 miles each day and handling chemotherapy and other treatments with courage and grace. John lived Aloha, the spirit of love and community learned early in life. His neighbors and friends in his beloved Ranchero Village looked forward to seeing him as he walked by each evening, often stopping to talk story. He met everyone as a friend.

John loved a good prank, and we could not take ourselves too seriously when he was around. But he knew how to get things done and we could count on him when help was needed.

John was born in Kalihi, Hawaii in 1956, raised by his mother, Eva Suinn Vesnefski and stepfather, Segundo Algoncin, both deceased, and by his elder sister, Patricia. He liked to go to movies and walk about with Patricia and brother, Bobby. A free spirit and beach boy, he loved to surf and ride his bike around Oahu with friends.

He graduated from Farrington High School, Honolulu, and joined the Air Force in 1974. John was a veteran of the first Gulf War. He served in Arkansas, California, Honolulu, Germany, Saudi Arabia, South Korea and Alabama before retiring honorably in 1995 as a Master Sergeant E7. His chosen field was horizontal construction, the building and maintenance of roads and runways. His work ethic was beyond reproach. He wrote instruction manuals in his specialty and received many awards and commendations for his service and leadership. A proud Airman, he loved his country.

John was passionate about his classic vehicle, a 1988 Ford Ranger minitruck that he owned for 34 years and kept in mint condition. He painted and repainted it every few years, always in his favorite color, orange, and showed it at hundreds of auto and truck shows around the southern United States. He won a room full of trophies, founded a mini-trucker club, and organized truck shows for charity. Most weekends he went cruising along Gulf Boulevard in Pinellas County; his vehicle was well known among locals.

He married and divorced Jeannette Tamura, deceased, and Velta McCracken of Bradenton, Florida. He is survived by his sister, Patricia Martiss of Escondido, California, brother Robert Vesnefski of Honolulu, Hawaii, and by his partner and best friend Donna Trott of Largo, Florida.

At John’s request, there was no funeral services. His ashes will be inurned at the National Memorial Cemetary of the Pacific, the Punchbowl cemetary, in Honolulu.

We are all the waves of one sea. Aloha, good friend.

To plant a beautiful memorial tree in memory of John Vesnefski, please visit our Tree Store

Share Your Memory of
John
Upload Your Memory View All Memories
Be the first to upload a memory!
Share A Memory
Plant a Tree