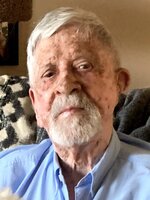 Don passed away on June 28th after a long battle with cancer.  He was born in Illinois and moved to New Port Richey as a child.  He was a graduate of Gulf High School and Florida State University.  After retiring from Honeywell, he had a second career as a Realtor with Century 21.

Don enjoyed spending time with his classmates from Gulf High School. He loved planning get togethers with them. Don also enjoyed visiting with his neighbors at Harbor Greens.

Don was a very kind and loving person. He endured many health challenges without complaining or losing hope. All who knew him grew to love him.