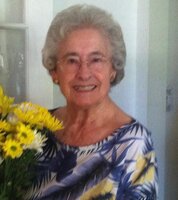 95 years old, died on May 22, 2022 in St. Petersburg, FL. Willie was born on January 8, 1927 in Clinton, IN. She was the 6th of 13 Poppas children born to Mary and George Poppas Sr. Willie lived in Kokomo, IN through her childhood and early married life. She graduated from Kokomo High School in 1946 where she was a majorette. Willie was very proud that all 12 of her brothers and sisters also graduated from KHS. While in Kokomo, she worked at both the Haynes Stellite and Delco Electronics plants.

Willie and family moved to FL in 1965 where she enjoyed the sunshine, the beach and raising her children. She always said she never moved to FL to do housework or cook, she moved to FL to go to the beach! For over 50 years Willie lived in the same house in St. Petersburg with a lovely view of the Garden Club and just a block from Boca Ciega Bay. Willie loved working in her yard, reading, bicycling the brick streets in her neighborhood, playing bridge, watching old movies on TCM with a bowl of popcorn or ice cream, golfing and playing Rummikub (of which she excelled up until her stroke). She did not like to cook but made delicious homemade noodles for holidays and a wonderful pineapple upside down cake. Willie sewed all the outfits that daughters Debbie and Dstre needed for their school and church singing groups and she liked to travel. Willie was proud of her Greek heritage. She took Greek classes at the St. Petersburg Jr. College and visited Greece in 1993 with Dstre and her sister Grace and niece Libby. Willie worked at Sperry Hercules for many years as a secretary in the security division. She was a very fast typist and was outgoing and friendly on the phone. Her sincere kindness was helpful when she worked in customer service at Clearwater Mall. This was her last job before retiring in 200l. Willie never knew a stranger and enjoyed making new friends.

Willie was an adored mother, a treasured Yia Yia, a beloved mother in law, great Yia Yia, sister and aunt who deeply loved her family and friends. Willie was always ready for fun and adventure with her children, friends and grandchildren and never turned down an invitation to go somewhere and do something! She went trick or treating with the grandkids and taught them to play jacks and pick up sticks and numerous card games. Willie attended all the grandchildren’s school concerts, plays, award ceremonies, graduations and activities and she volunteered in the classroom of their elementary schools. Willie is survived by her four daughters: Diane McClanahan (Tim), Debbie Taylor (Robert), Desma West (Chuck) and Dstre Smith, and four grandchildren Gregory Taylor (Stephanie), Cameron Taylor, Courtney Hall (Joshua) and Megan West and one great grandchild Callion. She is also survived by her sisters Grace Kingseed, Vanetta Beckman and Phoebe Carter and her brothers John Poppas and Tom Poppas along with many nieces and nephews. Preceding her in death are her sisters Anne Kleiber, Dorothy Mast, Freda Tranbarger , Bea Nielsen and Mary Lou Miller along with her brothers Ed Poppas and George Poppas Jr. Willie was also predeceased by her husbands Robert Butson and Robert Warren Jr.

Willie was beloved by many and will be remembered for her beautiful smile, her positive spirit, her kindness and her supportive and loving nature. A Celebration of Life is planned for later in the summer in Willie’s hometown of Kokomo, IN.