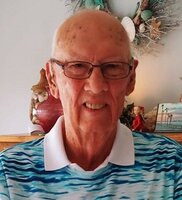 JAMES JEFFERSON HARRIS, 86, known as Jay Jay to his family and friends, passed away peacefully at home, in his sleep with his wife and best friend Debbielou, along with one of his granddaughters Alexis at his side on Oct 12, 2020. Born to Maron and Dorothy (Hughes) Harris in Tolono, Illinois, was the middle child of 5. Married to Debbielou on January 16, 1992, residing in Danville, Indiana, moving to Largo, Florida in 2006, recently moving to Clearwater in January 2020. He had love for family and friends, traveling, visiting State Parks, and spoiling his grandchildren as much as possible. James Harris joined the United States Army at the age of 16 in 1950, stationed in Germany, during the Korea conflict. After leaving the Army, James started working at New York Central Railroad in 1956 in Urbana, Illinois, when NYC was brought by Conrail he moved to Indiana going to work for Conrail. Conrail was sold to CSX, where he worked several years and retired in 2004 after 48 years as a Brakeman/Conductor. Surviving with his wife Debbielou, Clearwater, Fl., his son Ricki Jay Harris (Sandra), of Lillian, Alabama, step daughter Shawna West of Indianapolis, Indiana, Trisha Teague (Rick) of Darlington, Indiana, step son Mike (Amy) West of Plainfield, Indiana, Michelle Higgins (Mike), Florida. Sister in law Jackie Harris. James is also survived by 17 grandchildren, 6 great granddaughters, several nieces and nephews and great nieces and nephews. He was preceded by death by his parents, brothers, Bud, Jack, Richard and sister Norma, sister in law Maureen, daughter Jill Van Bussche.