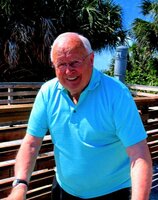 Author, professor, social justice activist, James J. Megivern died in Palm Harbor, FL on December 16, at the age of 89. Born in Johnson City, New York in 1931, he entered the Roman Catholic Seminary at 14. Ordained in 1959, he continued his studies in Fribourg, Switzerland, earning a doctorate in Theology. He also earned an S.S.L. from the Pontifical Biblical Institute of the Gregorian University in Rome. He taught at St. John’s University in New York until he left the priesthood in 1968. A position in the Philosophy and Religion Department at UNCW brought him to Wilmington, NC, where he met his wife Marjorie, a journalist at the Wilmington Star-News. Megivern enjoyed a long and prominent career as a professor at UNCW, serving as Chair of the Department of Philosophy and Religion for 17 years, He also lectured at various local churches, was a book author, and a columnist of “The World of Religion,” for the Star-News. A leading presence on the UNCW campus, Jim played a huge role in building the department of philosophy and religion, and he left an indelible mark on the larger community. As one colleague remembered him during a 2008 UNCW tribute, “The only time an Irishman is truly happy, is when he is in a fight.” Although he was a gentle and peaceful man, Jim loved always being out front, fighting for just causes, especially involving social justice issues. He was an important leader in race relations in the Wilmington community, and was co-chair, with Bertha Todd, of the 1898 Foundation in the inaugural years of 1997-99, when the story of the 1898 massacre was first brought before the public and a year-long, city-wide effort at racial reconciliation was carried out. His writing also reflected those concerns: in 1997 he published The Death Penalty: An Historical and Theological Survey which is considered the seminal work on the history of the death penalty in Western Christianity. He lectured and worked actively in the anti-death penalty movement. In 2003, he co-authored with his wife Marjorie, People of Vision: A History of the American Council of the Blind, a definitive account of the history of the formation of the American Council of the Blind. Jim was predeceased by his wife Marjorie Smith Megivern, his parents, John and Katherine Megivern, two brothers, John and Francis Megivern and his sister, Elizabeth Riley. He is survived by his brother and sister-in-law Paul and Lynn Megivern of Casselberry, FL, his sister Kathleen Megivern and her husband James Mecklenburger of Clearwater, FL, his four stepsons and their spouses, Steven (Nikki) Smith, Daniel (Lorri) Smith, Stuart (Sara) Smith and Bruce, (Barbara) Smith, and numerous nieces, nephews, great nieces and great nephews. Additionally, Jim’s legacy includes scores of college students who were enlightened by his words and moved by his example.