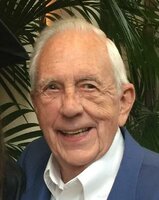 Richard J. Spires Richard (Dick) Jeremiah Spires, 82, of Largo, FL and Lancaster, OH, passed away on April 2, 2020. Dick was born in Lancaster, OH on August 23, 1937, the oldest of five children of Harley and Anne O’Leary Spires. He attended elementary and high school at St. Mary of the Assumption Catholic Parish in Lancaster. He earned a BS degree in Electrical Engineering from Ohio University in 1960. He joined AT&T Bell Laboratories in New Jersey and went on to earn a MS in EE from NYU. Dick had a successful engineering career, spending 30+ years with Bell Labs. He was one of the leaders in developing signaling systems for advancing the state of the art in long-haul telephony systems. Dick was always mechanically inclined. He enjoyed building models as a child and developed a love of photography in high school. In college, he was a member of the Phi Kappa Theta fraternity and served as President his senior year. He enjoyed outdoor activities, including camping, hiking, rock climbing, golf, and snow skiing. Dick was an avid card player, and enjoyed Bridge and Euchre. He has always been involved in church activities, was a member of the Knights of Columbus, and most recently served as an usher at St. Jerome Parish in Largo. In his retirement, Dick enjoyed travelling and loved spending time in the American West and in France. He also enjoyed spending time with his children, grandchildren, and great-grandchildren. Dick is preceded in death by his parents, Harley and Anne, and by his brother Steve and sister Mary Brown. He is survived by his wife of 32 years Mary Dingess Spires and step-daughter Kimberly Kocak (Jerry) of Ridgeway, SC, his former wife Joan Hart Spires and their three children Richard (Jackie) of Arlington, VA, Linda Mock (Ralph) of Plano, TX, and Susan Johnson (Greg) of Paola, KS. He is also survived by his brothers Bill (Sheila) and Greg (AJ), his brother-in-law Bill Burns, eleven grandchildren and eight great-grandchildren.